At first glance, Belgiums Ghent is a charming old city with antique houses, a winding network of canals, beautiful medieval churches, cobblestoned squares and fortresses. But those who take their time to get under the skin of the city, soon discover cutting-edge street art and funky cafés. Check out the 7 top things to do in Ghent, Belgium.

How to get to Ghent, Belgium?

Where to stay in Ghent? 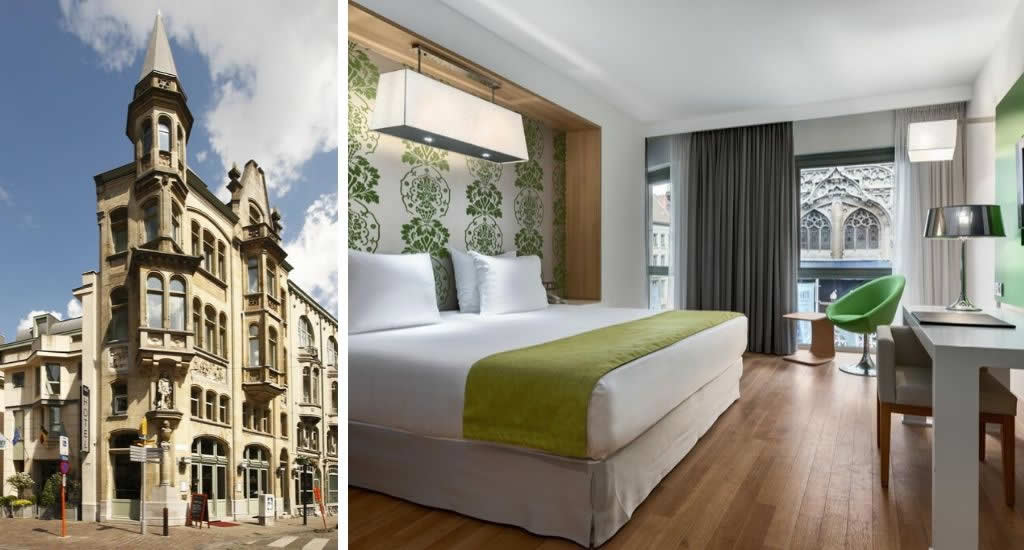 If you’re looking for a good hotel in Ghent, I highly recommend staying at NH Ghent Belfort. I mean, the beautiful building in which the hotel is set alone is enough reason to stay there when in Ghent. The location couldn’t be better, next to Ghent’s terrific city hall and within a minute’s walk of important sights like the Belfry and the Saint Baafs cathedral, where you can see the Adoration of te Mystic Lamb. But, back to the hotel. The building may be ancient, the rooms are anything but. Spacious, clean and very comfortable. 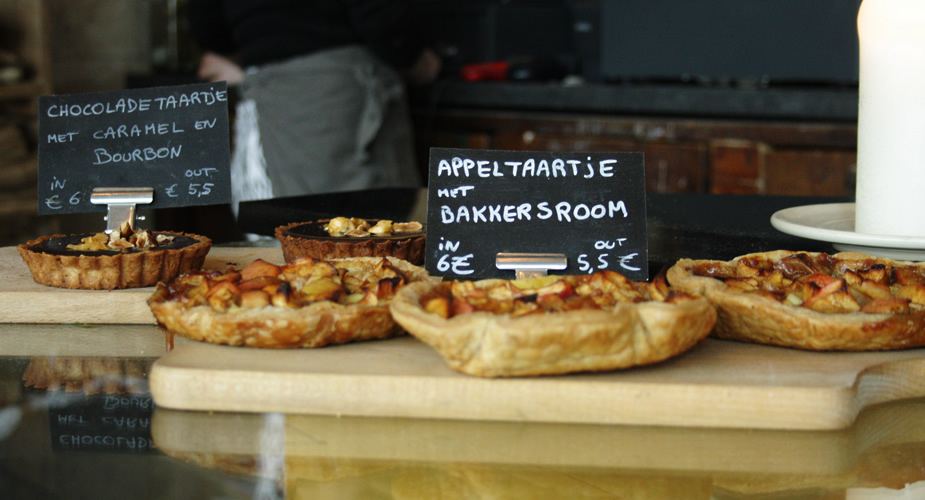 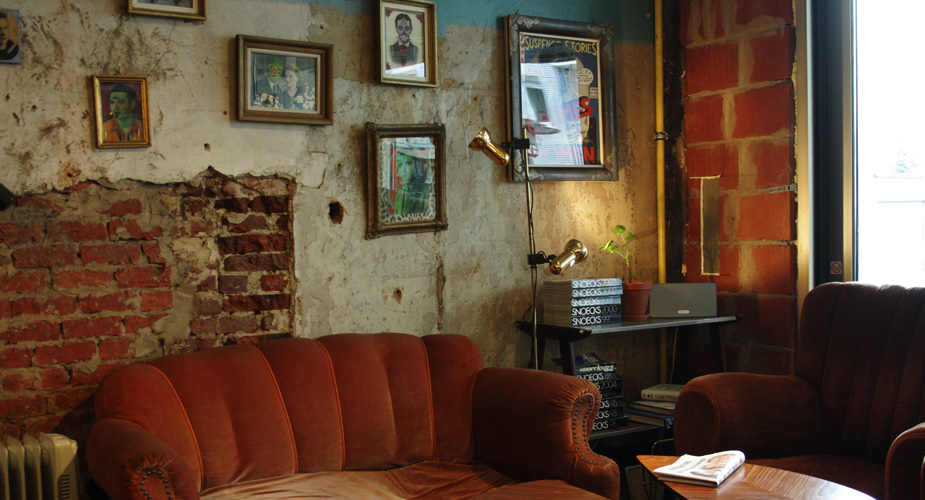 7 top things to do in Ghent, Belgium 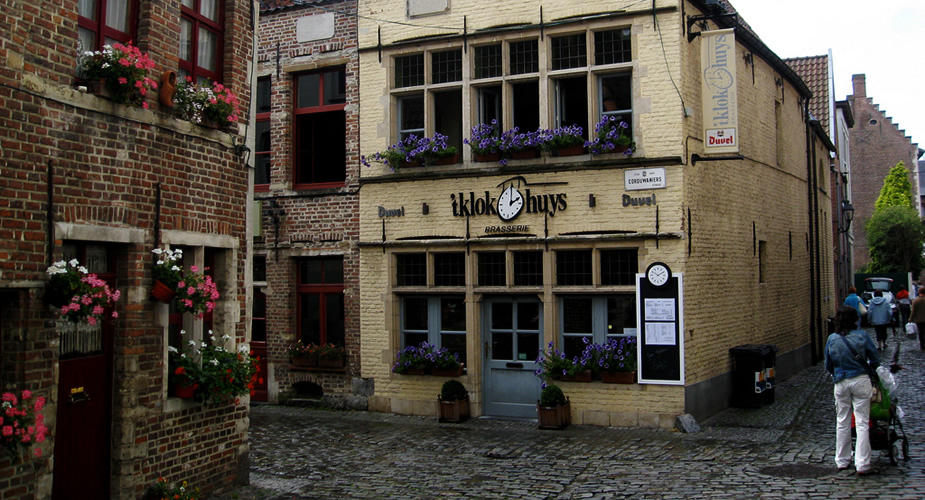 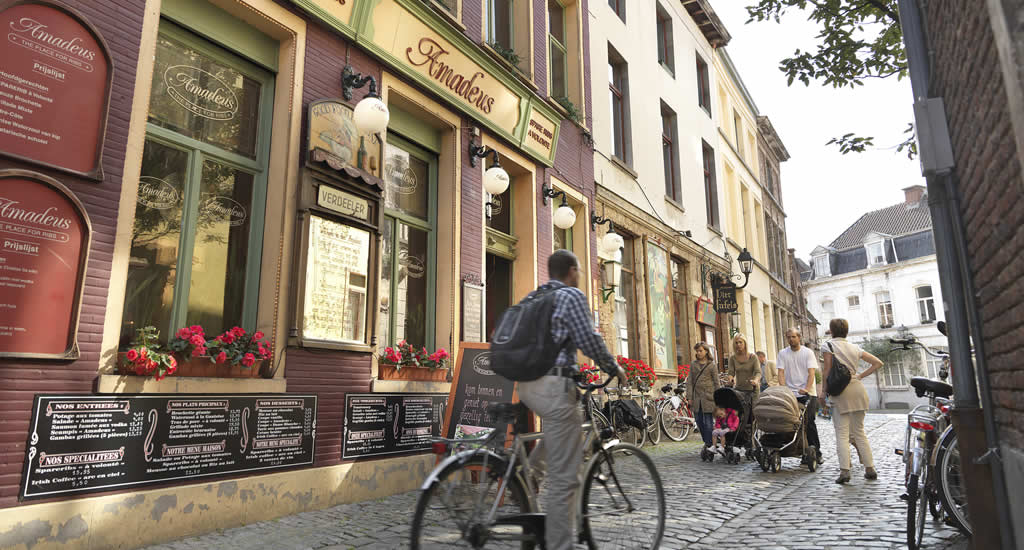 Patershol is considered Ghent’s most desirable neighbourhood and you won’t need long to see why. The first houses in the quarter, leaning to the centre of town, were built as early as 1329 and were part of The Friary of the Calced Carmelites. Just a few decades ago most of the houses were restored and sold for a pittance, instantly turning Patershol into one of the most popular places to live in the city.

Patershol is also the place to be when it comes to Ghent fine dining. It doesn’t matter if you’re in the mood for sushi or Thai food, you’ll find a restaurant to meet your taste in the neighbourhood. However, since you’re in the Flanders I suggest you go for something more local. My favourite place is ’t Klokhuys where you can order some Flemish specialities like beef stew or waterzooi, I recommend you try some oysters as well. 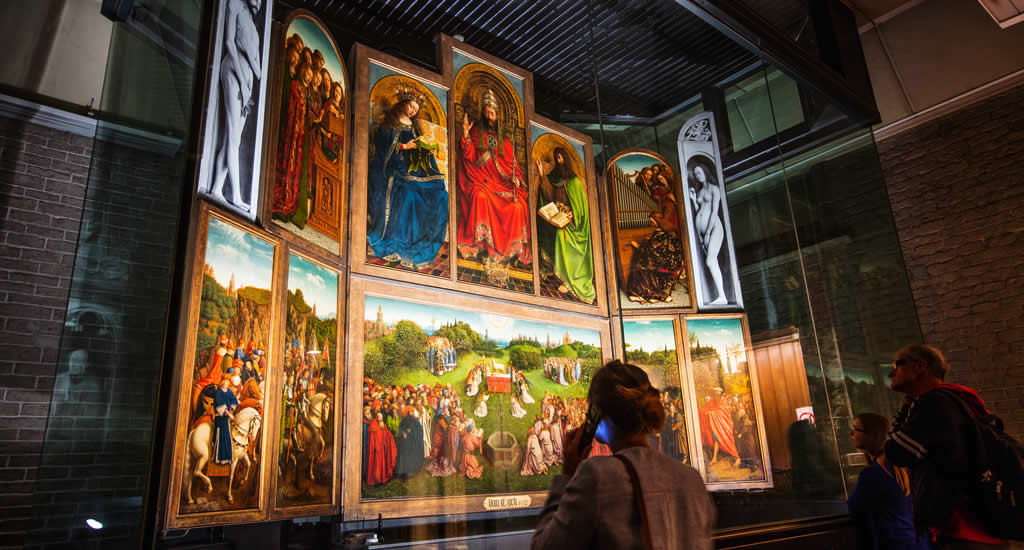 Instead of going to a museum to see some old Flemish Masters, just pay the St. Baafs Cathedral a visit. It’s the place to admire the beautiful stained glass windows, the Roman crypts and ‘The conversion of St. Bavo’ by Peter Paul Rubens, but first and foremost you visit the cathedral to take in the stunning work by the Van Eyck brothers ‘The Adoration of the Mystic Lamb’, also known as ‘The Ghent Altarpiece’. The masterpiece is kept in an especially climate controlled chapel and you have to pay and queue up to see the original. 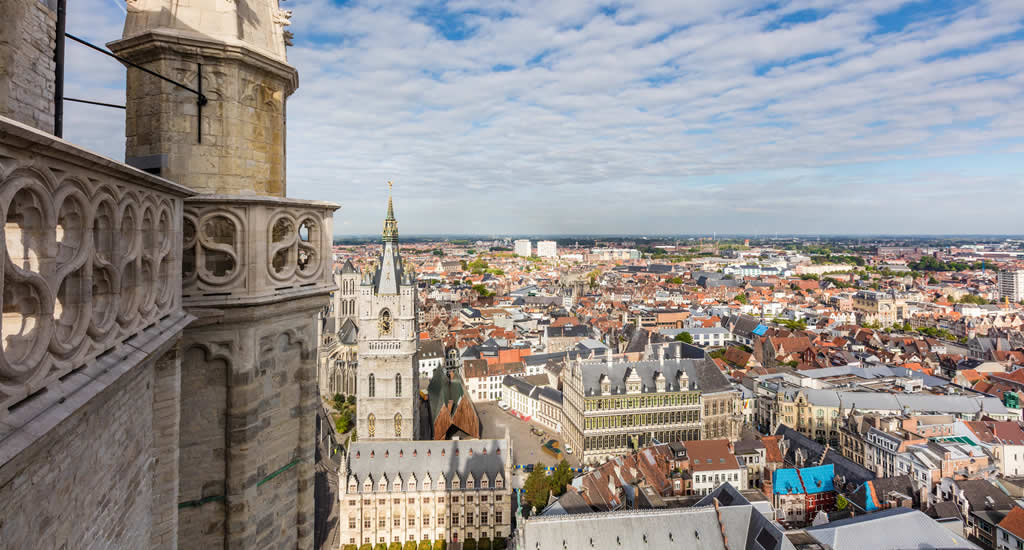 The Ghent Belfry is almost 100 meters high and is standing tall and proud since te 14th century. You can decide to climb allthe 350 steps to the top or take the elevator halfway there and climb the rest. The view over te city from the top is a very nice reward for all that climbing. Note the dragon weatervane, it has become a bit of a symbol to the city. 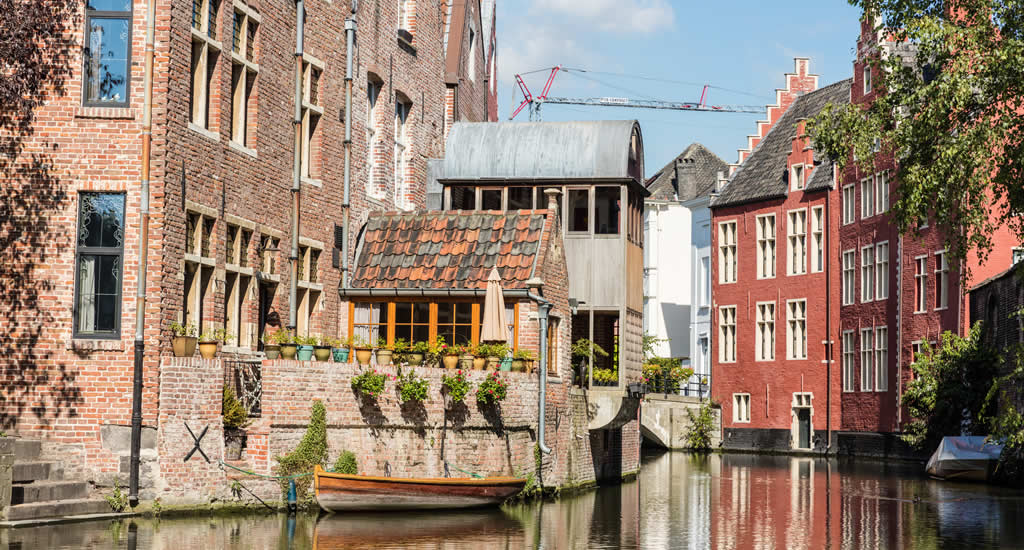 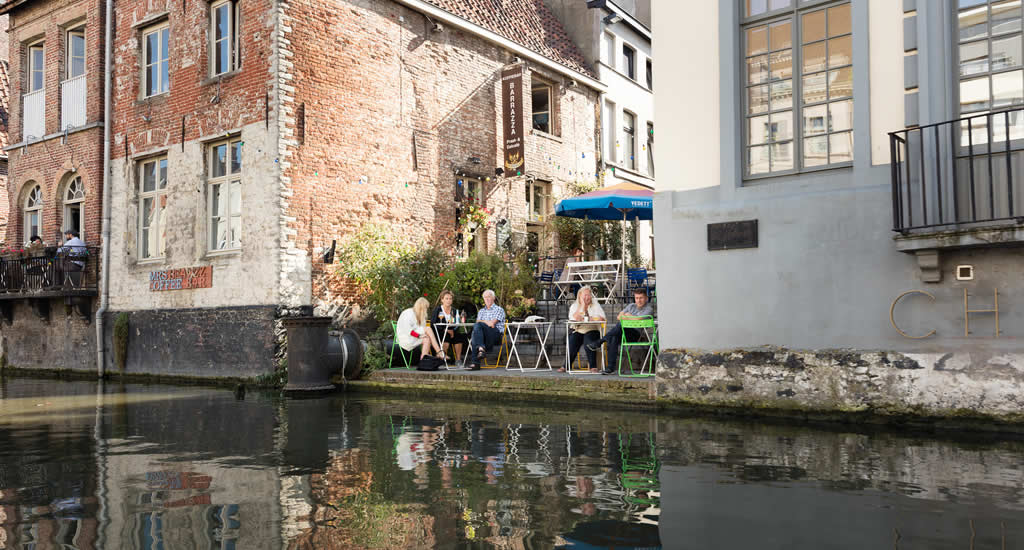 Discovering Ghent from the water is nothing less than spectacular. Did you know Ghent was one of the largest European cities, back in the Middle Ages? And a lot of buildings along the water date back to those long forgotten eras. It’s such a treat to see all that historical splendour from up close and hear some fascinating facts during a boat trip from either Graslei or Korenlei. 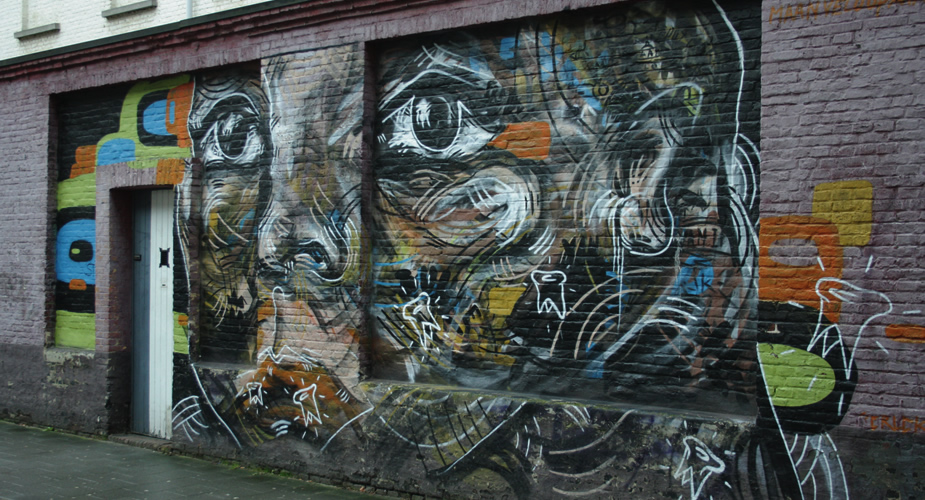 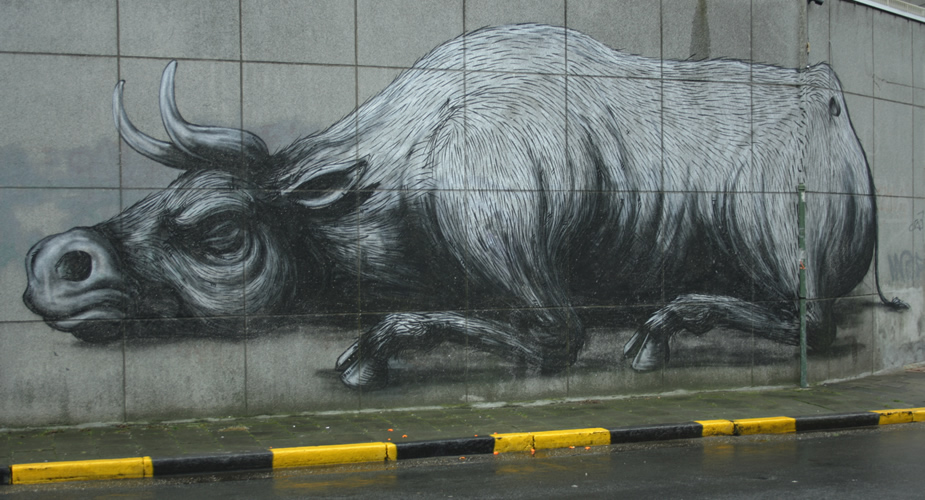 Although the Van Eyck brothers are definitely famous masters from Ghent, the city has moved on from this and finds itself has the epicentre of a new art movent: street art. World’s most famous street artists are born and raised in Ghent, like ROA and Bué the Warrior, so it’s no surprise Ghent is one of the best cities in Europe to go street art spotting. You can download a map to see where you can find the most beautiful murals. 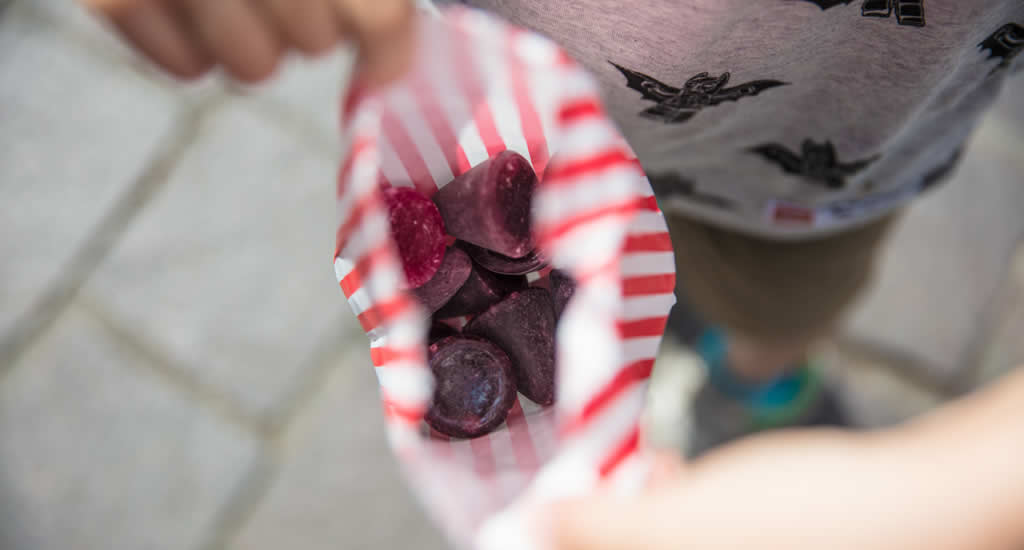 It’s funny to think that the treat that Ghent is most famous for is actually a mistake. Cuberdons, or ‘Ghent Noses’ because of the typical cone shape of the sweet, was an accidental incention by a pharmasist. But actually, his mistake tasted quite good. The cone-shaped sweet tastes like raspberry, is hard on the ouside and nice and goo-ey on the inside. Nowadays, you can buy the treat almost everywhere in the city. But you can buy the real deal at Confiserie Geldof. 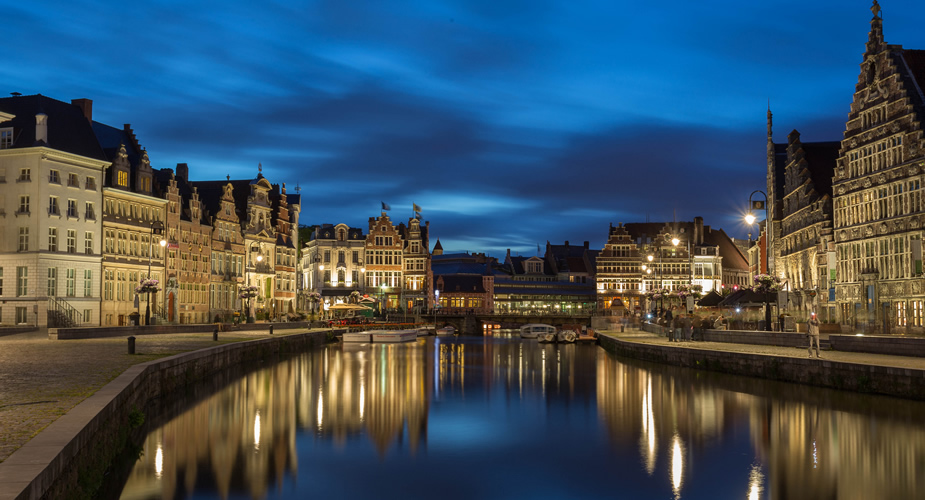 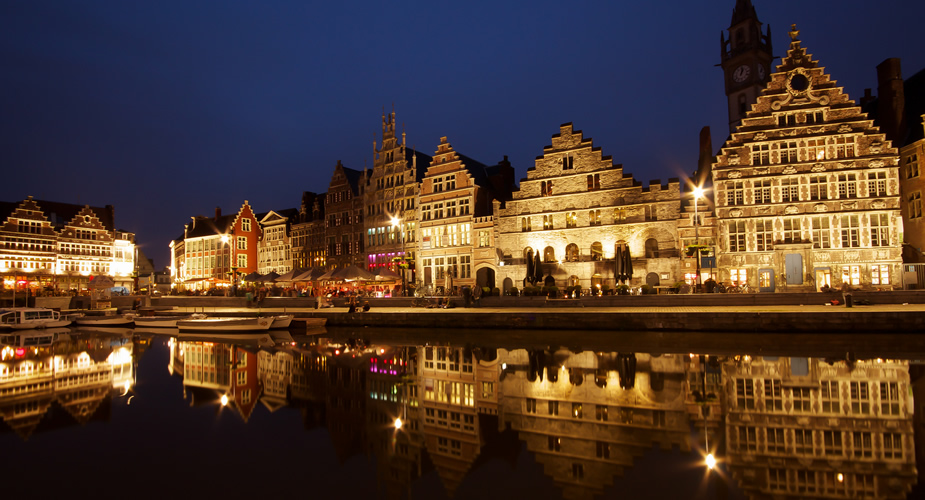 At the start of the new millennium Ghent’s local counsil came up with a brand new ‘light plan’, which wasn’t just meant to light the city more efficiently. It should also make people feel safer. The side effect of this plan is that all historical buildings in Ghent are brilliantly lit at night. Take an after-dinner stroll to work off that rich Belgian food and enjoy the beauty of Ghent by night. I especially like how Graslei and Korenlei look after dark.

Top things to do in Ghent, Belgium
Save on Pinterest 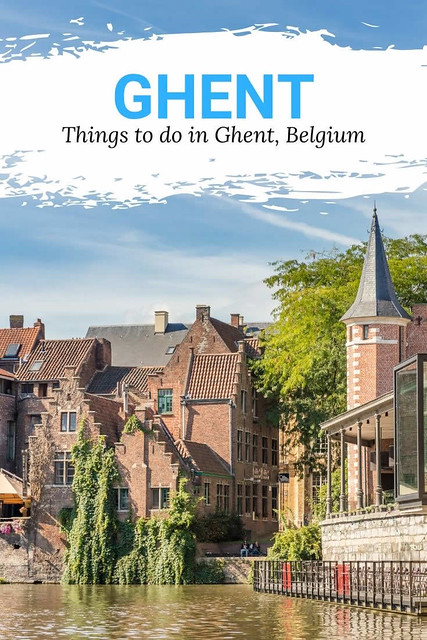 Have you visited Ghent? What did you think of it?

Read more of my articles in English.
For example, my articles Bruges and Utrecht (The Netherlands).
If you have any questions, please don’t hesitate to contact me.
You can also follow me on Instagram!

Wow! Ghent looks amazing. I’ve never really thought about visiting but I think I might consider it now.

What a cute town! Thanks for introducing Ghent to me, I have never heard of it before. I want to live in Patershol.

Ghent looks absolutely spectacular. I hope I’ll get to see it someday.

Your article was especially helpful to plan my trip to Ghent. Thanks for this article and keep up the great work!

This looks charming! But then I said that about Bruges as well, and I didn’t fall in love…

Hm, since Ghent is far less crowded than Bruges… you might feel that spark with Ghent (or that’s what I’m hoping!).

Ghent is on my bucket list. I especially love how it looks at night. The lighting is beautiful.

Such a lovely place!

Ghent charmed me big time! I loved my visit there this summer. We stayed in the Post Office hotel right on the canal. Your photos bring back good memories!

Ghent is on my list, we always go to Brugge and do not venture out. Beautiful photos.

I’d go to Ghent like a shot after reading this article! Looks especially beautiful at night. Thanks for all the great tips.

I was there on a business trip in 2005 and did not have the time to do a full city tour. I just remember we had a nice boat tour and afterwards a food tour. Sadly, the meal in each restaurant was tiny and I was starving after the tour was over. Of course, everything was closed including a McDonalds which closed about 5min before we got there. That was a painful evening.

Haha, oh Rudy I feel for you! Business trips can be frustrating like that. Now you have no choice but to come back to Ghent, take in all the sights and eat all te food!

Good tips Esther…we should have read this *before* we visited! But it is almost more fun to discover on our own even if we miss something. 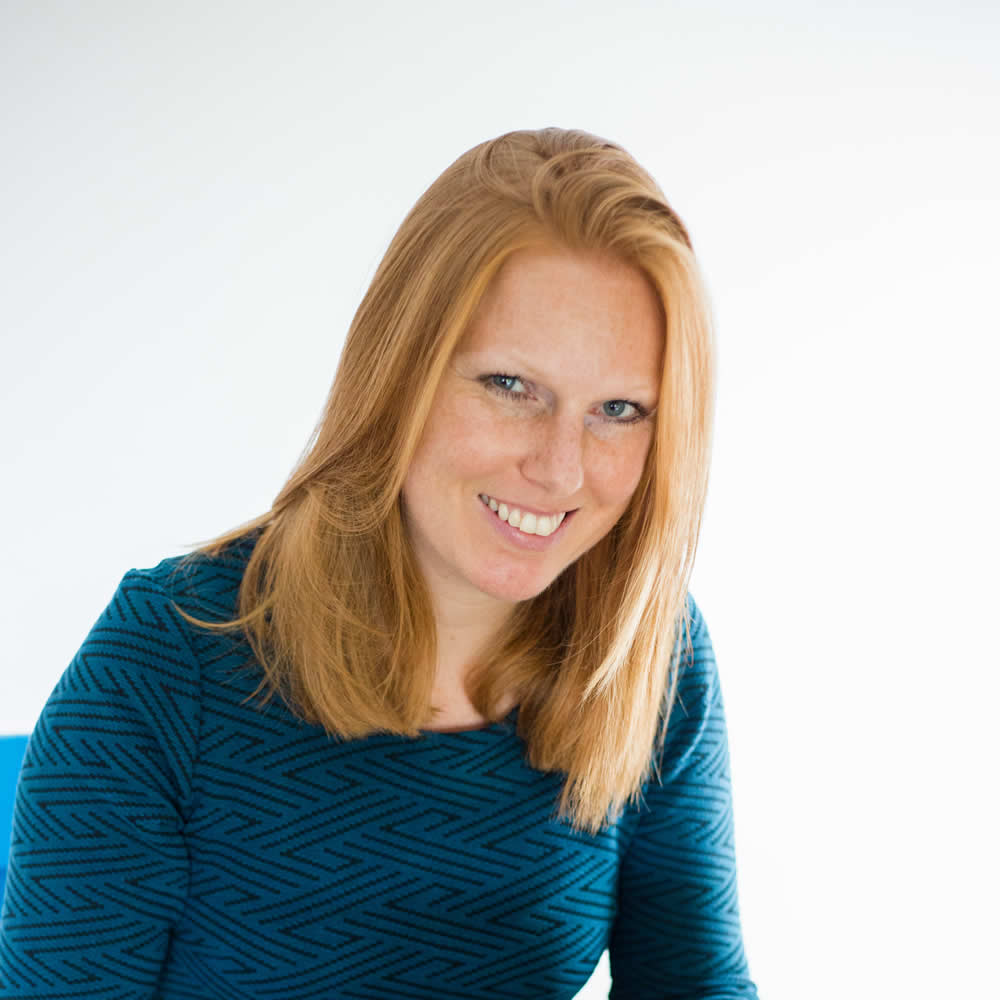