Heidelberg, Germany is one to sweep you off your feet. The beautiful riverside setting, the baroque old town, the dramatic castle rising up from the town centre. No wonder writers, poets and painters have been attracted to Heidelberg throughout history and have sung their praise on Heidelberg in and on their books, poems and canvases. No wonder so many international students and visitors are drawn to Heidelberg every year. But there’s more to Heidelberg than just the castle and historical city centre. Heidelberg has a hip and modern side too. Follow this hip guide to Heidelberg Germany to plan your trip.

Plan your trip to Heidelberg, Germany 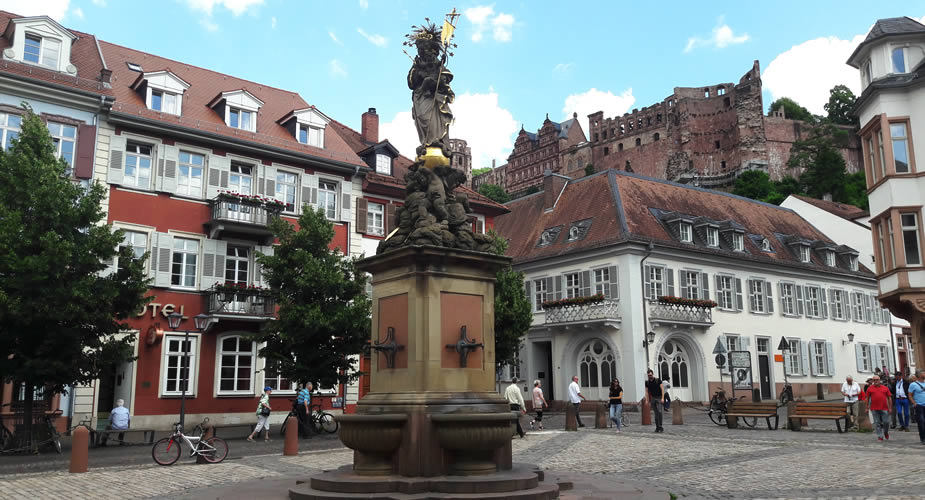 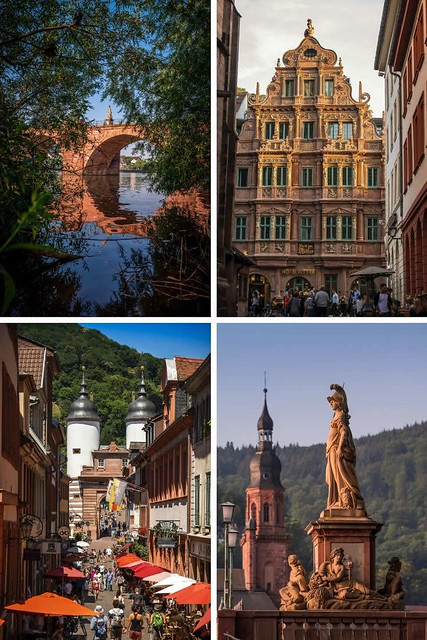 Goethe and William Turner adored Heidelberg, as did Mark Twain, who spontaneously decided to stay for three months after setting off on his European adventure in 1878. His observations can be read in A Tramp Abroad. Due to its literary history, Heidelberg Germany became UNESCO city of literature in 2014. The old town of Heidelberg is remarkably coherent: red-roofed half-timbered houses from the 18th century under the ever watchful eye of the crumbling castle on the hilltop. Unlike most German cities, Heidelberg wasn’t bombed to pieces in the Second World War, probably because the USA already had its eyes on the nearby airfield.

Nowadays, thousands of tourists and foreign students wander the streets of Heidelberg in awe of its traditional houses, cosy squares and of course, the castle. But Heidelberg has a different side as well, a more modern side. On my visit to Heidelberg, I discovered independent shops among the German chains and tourists shops along the main street Hauptstraße, bright and sunny cafés and groundbreaking street art. So I hope you’ll read this hip guide to Heidelberg so you can discover The Other Heidelberg. 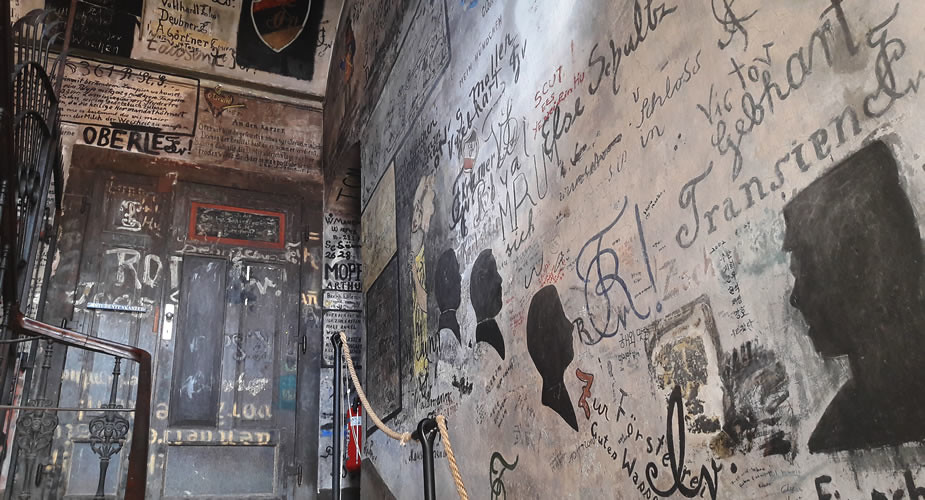 Heidelberg, Germany is home to one of the oldest universities in the world. University buildings are scattered all over the old town and it’s actually allowed to visit them all. That’s maybe a bit much, but you don’t want to skip one thing: Student Prison. In the olden days, students were bound to university law, not common law, which meant that the provost would sentence any student who got up to no good.

And therefore, the prison was also part of the university. To most students, however, a few nights in student lock-up was a bit of an honour and for some, even a rite of passing, and apparently Mark Twain also spent a night here after a few glasses too many. The hundreds of cartoons on the wall are highly entertaining.

The best places for coffee 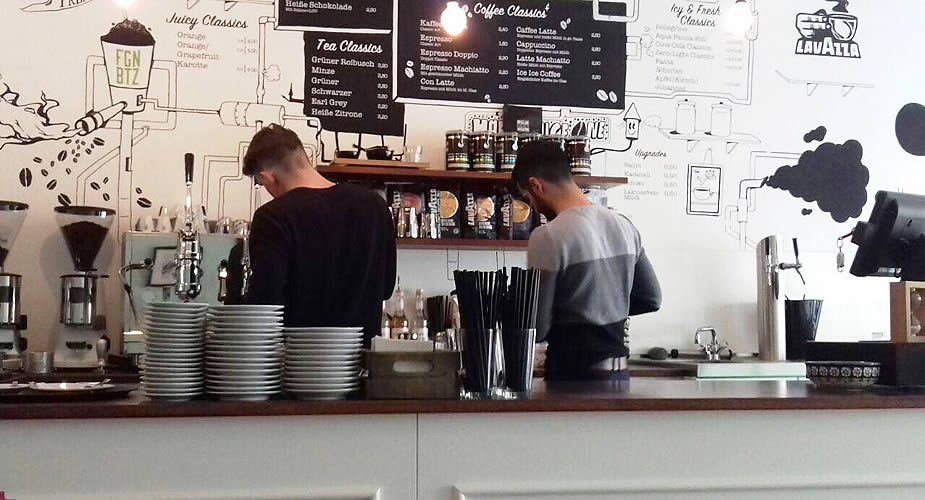 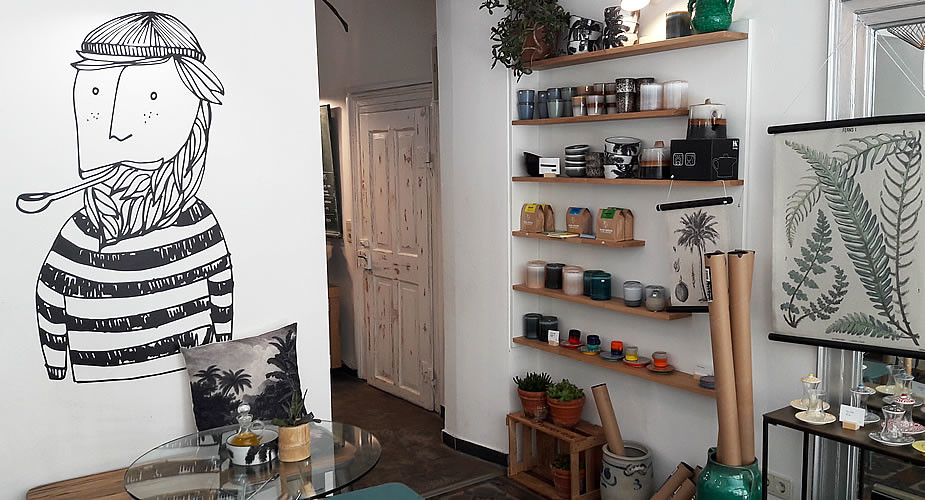 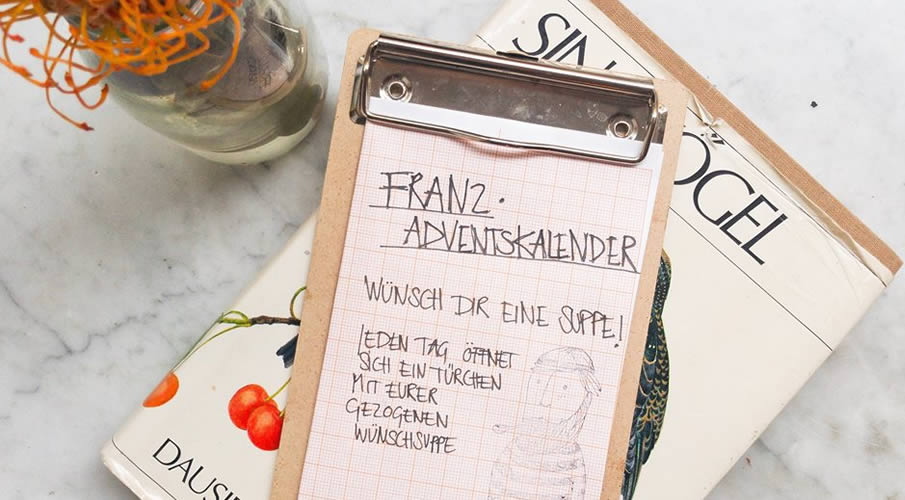 There is a little bit of Berlin in Heidelberg, and it’s called the Märzgasse, just off Hauptstraße. Most cafés in Heidelberg are quite traditional, and there’s nothing wrong with that. I mean, kaffee und kuche, anyone? Yum!

But if you’d like to go for a less traditional and a bit of a younger atmosphere, head for Märzgasse with lots of fun cafés and bars. I highly recommend people watching on one of the battered vintage couches of Unter Freunden (amongst friends) or go for brunch or drinks a Franz Soupmarine further down the road where you can also shop some fun graphic design, like cards and jewellery. 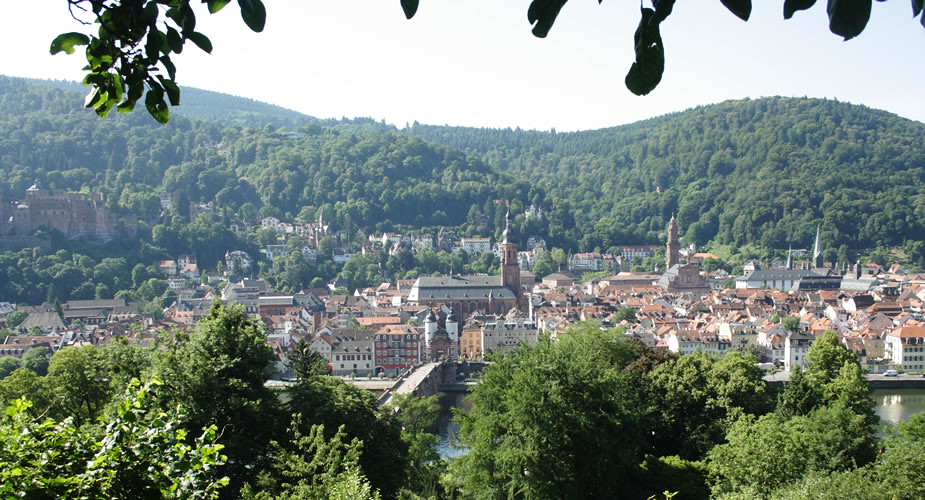 Heidelberg Germany is a city for dramatic panoramas and the best way to overlook the pretty old town and castle perched on top of the hill is to walk over the old bridge and take a walk over the Philosophenweg, the philosophers road. From the bridge, take the winding road up, along some vineyards, shady trees, ruins and a beer garden for the best views.

It’s quite a steep climb, but you’ll be rewarded. If you’re wondering about the name: it’s called Philosophenweg as supposedly philosophers came here to do their thinking before writing or publishing, and when overlooking the old town, especially at dawn or sunset, it’s easy to understand why they came here to clear their heads. 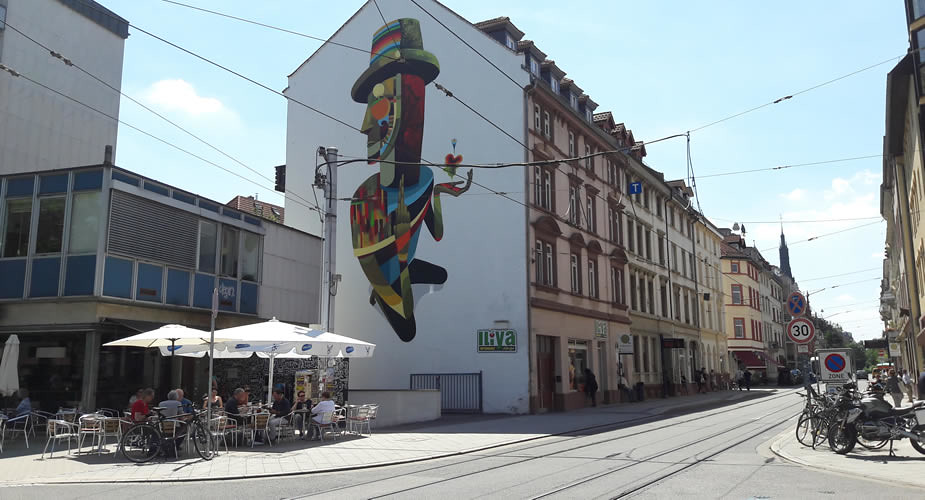 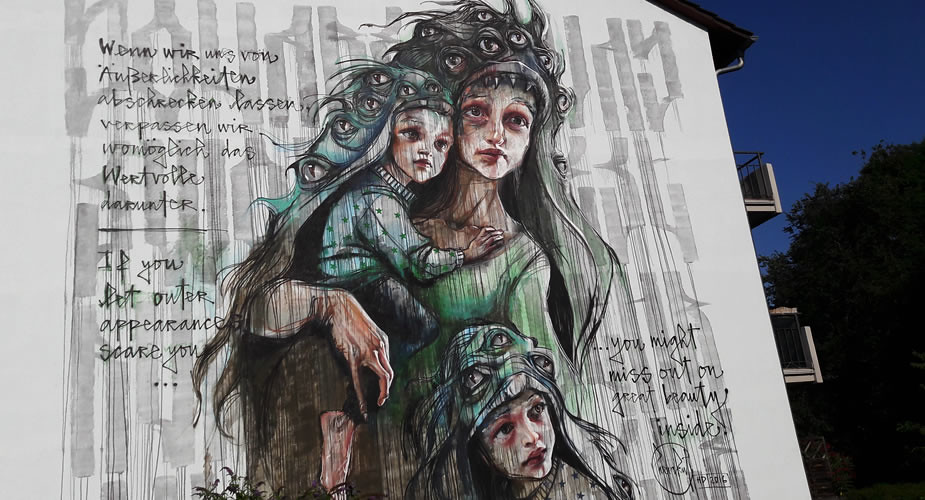 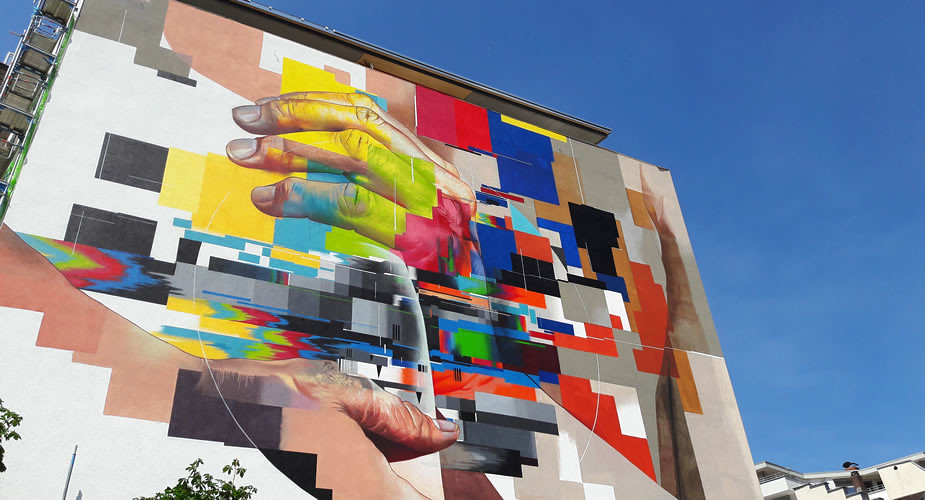 Honestly, I never could have guessed that a (in my opinion) quite traditional town as Heidelberg would have such a modern side as well. And I especially didn’t expect street art as cutting edge as the murals I saw that were made as part of the Metropolink art festival that has been held every summer since the last couple of years.

I had no idea that Heidelberg was the epicentre of the German hip-hop scene in 80’s (I know, hip-hop… Germany…) but here it is, and during these days graffiti art also found its way to Heidelberg. Luckily, this graffiti has far outgrown the tags-by-the-station stage and over the last few years, world-renowned artists come to the city in summer to leave their mural-mark. I especially loved the works by WESR, Limow and Herakut. Check the Metropolink website for the location of the murals.

Have lunch in the old stables 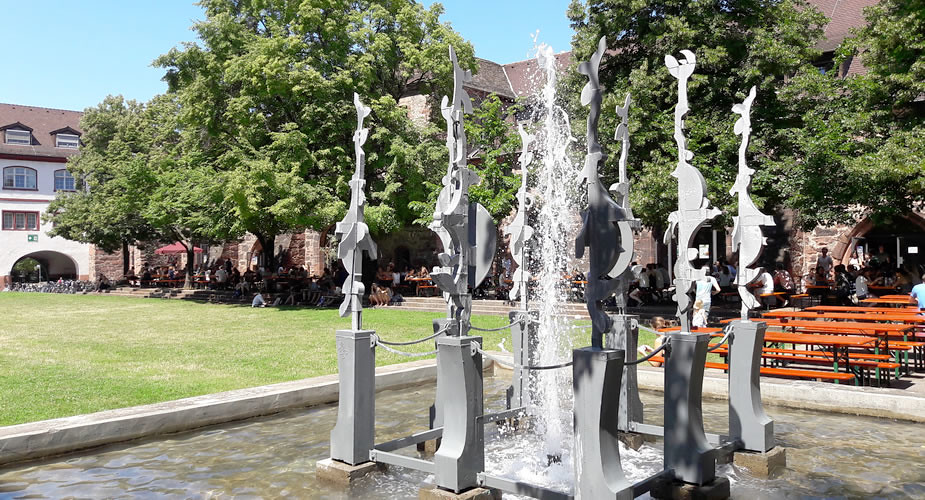 Thousands of German and international students attend classes at the oldest university if Germany and of course, they all have to eat. And drink. A local guided me towards Zeughaus: the old stables of the elector of Heidelberg. This grand historical building could have easily become a museum, but it’s something better now. A student cafeteria. Now, maybe this doesn’t sound promising. But remember, this is Germany. The country where even the most simple and economic food tastes amazing.

And it’s the same for the student cafeteria at Zeughaus. You have loads of options every lunchtime: meat, fish, vegetarian, rice, pasta, potatoes, bread, curry. It’s all there. And you can basically stock up your tray and gawk at the cassière when she tells you how little you have to pay. When the sun is out, it’s such good fun to hang out outside, side by side with the students having a drink.

Have you visited Heidelberg in Germany?
Read all my articles in English! Want to know what I’m up to? Follow me on Instagram. 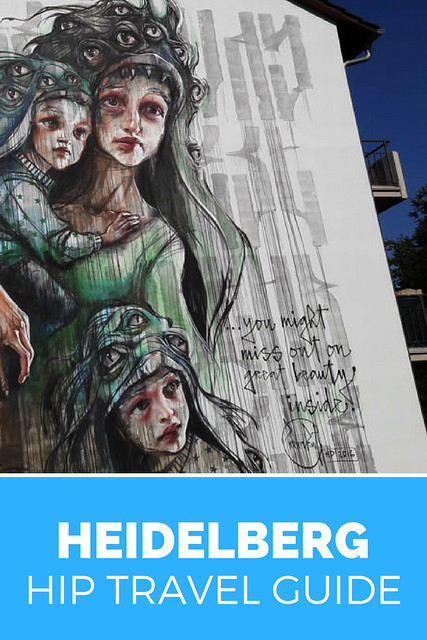 You piqued my interest with hip Heidelberg! I studied abroad there back in ’07 before stuff was ‘hip’ and we were just there at the beginning of summer, so I wanted to see what you found! I was wondering if they had any street art yet!

I always thought of Heidelberg as a traditional city, this guide showed me a totally different perspective. I need to plan a visit next time I fly to Europe. Thanks for sharing.

The city looks romantic and fun. I would love to see the old castle on the hill. I know there’s a beautiful bridge, too. And it’s good to know where you recommend having coffee!

Love the street art!! Heidelberg indeed looks like a hip and happening place.

We really know very little about Heidelberg, so this post was very interesting. The street art looks awesome, and we’d love to visit the old city and castle. Seeing the student prison would be fun, too – glad my school didn’t have one; I’m sure I would have been a frequent visitor.

I love how different many cities in Germany are and this is another example. Really would love to see those stunning views and check out the cool cafes. The student prison looks incredible too!

This is a great guide and Heidelberg looks like a city I need to add to my list. The Student prison looks fascinating – although it sounds a bit harsh – but I guess the students got into the tradition of it all. Street art seems to be making an impression on even the most traditional towns now, some of the works you captured here look so good.

Oh Heidelberg – who knew! Love this hip view of such a traditional city. The mix of old and new is intriguing and I’d be heading straight to Märzgasse for my daily brew.